Carlo Giovannoni was born in 1915; he was a self-taught painter when, only fourteen years old, he became apprentice at the Master Sculptor Angelo Del Santo’s Studio and there he remained until the Master died in 1938.
It was during the twenties and thirties that he realized his first sculptures in clay and in plaster, more influenced by futurism than by the late-liberty Del Santo had taught him, as we can very well see from an interesting bronze sculpture of 1934, PUGILATO. He had his first exhibitions in the mid-thirties, in 1935 he was present at the national exhibition “A Mother’s Dreams” (Genoa), at the Young Artists’ Exhibition in Palermo, at the interprovincial trade-unions’ exhibition in Genoa (1938-1939), at Italian Artists in Arms’ exhibition (1942).
During the post-war period more and more often he gave himself to painting and sculpturing as well, but while as a painter in 1948 he organized the “The Seven Artists ( Gruppo dei Sette)” (1948-1952), together with other painters from La Spezia such as Gino Bellani, Giancarlo Carozzi, Guglielmo Carro, Vincenzo Frunzo, Bruno Guaschino and Giacomo Porzano and realized works that might be considered “variedly naturalist abstraction”, his sculptures seem to show only faint traces of these experiences because they are firmly grounded on the human figure even if some slight abstract evidence may be traced in the works of this period and from time to time also in the following periods, for instance in “The Family” (1949), “The Meeting” (1973), “Farmers” (1975).
From this time onwards, he took part in a number of important national and international exhibitions: for instance in 1949 the Contemporary Art National Show of Asti together with renowned artists such as Mario Sironi, Roberto Crippa, Renato Birolli, Felice Casorati, Giorgio Morandi, Alberto Burri. The Costa Prize International Show. Ravenna’s National Show. The sixth Quadriennial Show in Rome (1952). The “Poets’ Gulf” National Show in La Spezia from 1948 to 1958). The National “Modigliani Prize” Show in Leghorn in 1956 and 1957. The Quadriennial National Show of Turin (1968) and the Figurative Arts Show of Turin (1969).
In 1959 together with Carlo Calogero Datola, Rino Mordacci and Angelo Prini he constituted “The Group of La Spezia” and with them he exhibited in Lugano. His deepest researches in abstract painting date back just to these years and it was at that time he made the following declaration:
“….it is in this way that, through a constant connection among colour, light, shape and architecture in a painting, I try to reach a vision on what is invisible and indistinct, without falling into any fiction frill, without high-sounding words, with a concise, good taste and if possible intelligent language”. 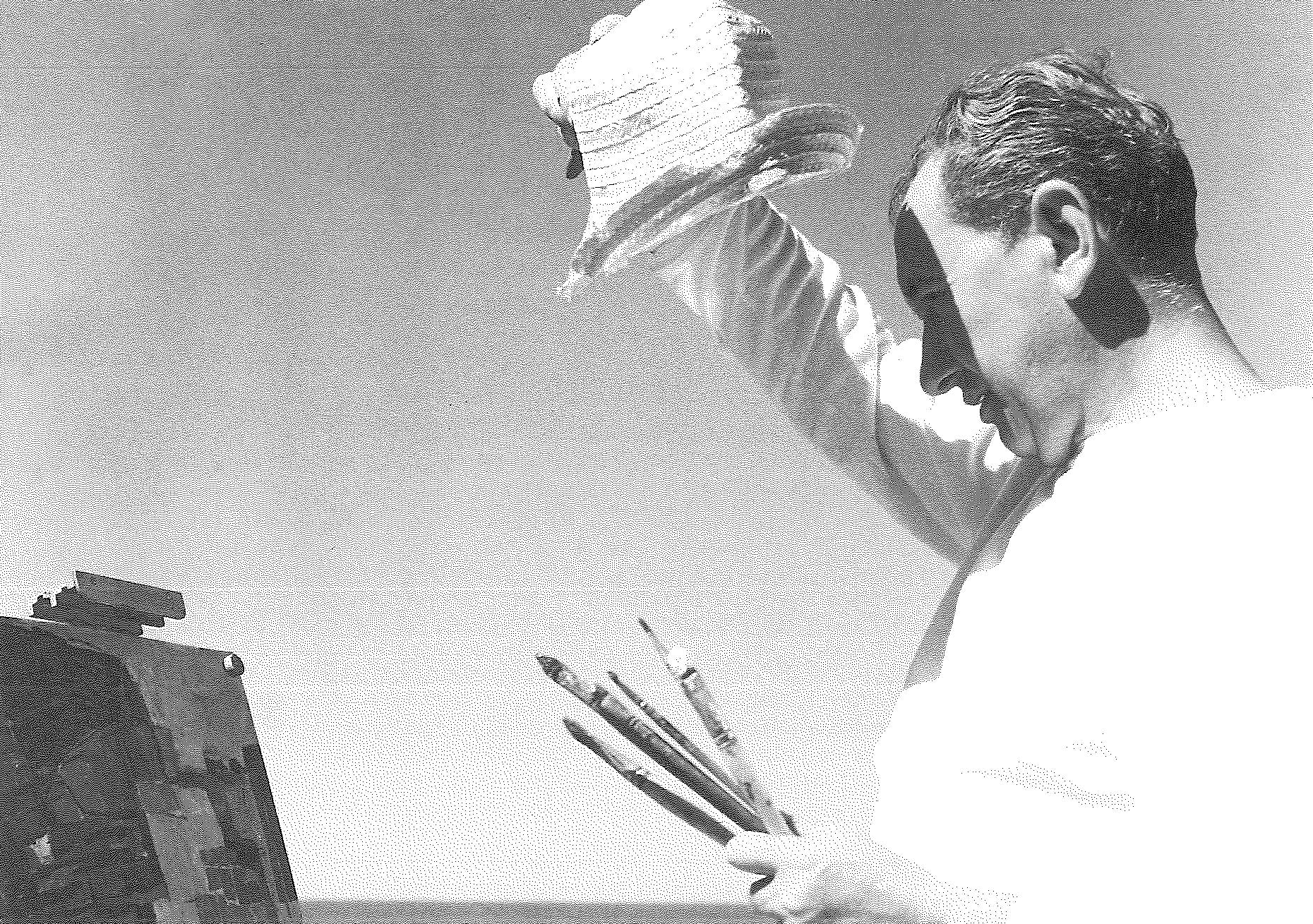 During the ‘50s and ‘60s, with some success, Giovannoni devoted some of his time to 16mm. amateurish cinema; as director of several short documentary films, he received prizes and national and international rewards (Ettaro di mare, Vigneti sommersi, Uomo solo, Gente nostra, Nicolino, L’ultimo approdo). We are able to trace such experience that enriched his research on lights and colours in the paintings and engravings of the following years.
At the same time he went on sculptoring and in the ‘60s he realized many wooden works, recurrent subjects of his research were mainly men and horses, maternities, figures. His religious art was particularly expressive and inspired: Christ’s Deposition ( Chiesa N.S. della Salute, La Spezia), the Way of the Cross and the Altar (Chiesa di S. Bernardo, La Spezia), the Sacred Heart (Chiesa di Gaggiola, La Spezia) and many more in other churches.
In 1968 with other colleagues, he opened the art gallery ” Gabbiano” where he was able to exhibit his work for about twenty years.
It was during the ‘70s and ‘80s that he had a leading role in many personal and collective national exhibitions; he alternates figurative and abstract paintings, the same thing happened also in his extensive graphic production ( Indian Ink drawings, Coloured Indian inks), mixed techniques where we find the usual subjects: seascapes, figures and horses.
On the occasion of the Show at the Mensch Atelier ( 1974), the art critic of “Die Welt” Hans Theodor Fleming wrote: “Carlo Giovannoni owns a very high degree of virtuosity, quite often his subjects represent horses and riders that man wants to dominate. Such coloured indian ink graphics, the colours one upon the other and alternatively the spray technique give his works a high degree of effectiveness showing his great skill. In his paintings main themes and shapes move within the range of classic and the best known modern expressions, giving movement dynamics and thrilling brightness to his work”.
In the early’ 90s, due to a slow and severe desease, his activity slackened off, however the great love for his work induced him to organize two other important exhibitions: the “Antologica” al Pignone in 1992 and “Scultori in Liguria nel secondo ‘900” at S. Margherita Ligure in 1995. His partecipation to the New York Art Expo in 1995 was his last one.
He died in La Spezia in December 1997.
In August 2001 the Municipality of Sarzana (la Spezia) organized a retrospective exhibition in the prestigious historical Palazzo Civico, including the works of the “Gruppo dei Sette” period, abstract works of the ‘50s,-‘60s- ‘70s, engravings and his most representative bronze sculptures.